Recently, in a pre-offsite meeting survey we asked a senior management team, “What have been the major factors inhibiting their organization from more growth?”  The number one answer by far: Too many initiatives – a response we’ve heard many times over the years.

Executives, in their role as company builders focus on doing, on continually moving their organizations forward. In doing so, they spend a lot of effort defining and launching new growth initiatives.  While this makes sense, it tends to divert attention away from an equally important task – deciding what to stop doing. Time and time again over the years, we’ve watched managers who excel at identifying new initiatives in offsite meetings struggle when the conversation turns to terminating current or planned initiatives.

So why is pulling the plug on marginal initiatives so hard to do?

The typical organization has scores of initiatives planned or in progress at any time.  When we conduct an inventory of existing initiatives, we often find 2-3 times the number of initiatives already underway than the CEO expected.

Instinctively, most CEOs want to take out a red pen and have the senior team start drawing lines through initiatives.  But problems persist.  Each initiative has an owner somewhere who believes in it and is emotionally invested.  And when the senior team considers the initiatives one by one, it’s the rare initiative that can be immediately dismissed on a stand-alone basis.  When the rare initiative does end up singled out for elimination, it often ends up absorbed into a larger effort, rebadged as a subset of a surviving piece of work.

The usual path out of this impasse is to score and attempt to rank order the initiatives – an approach that inevitably encounters some fundamental conflicts and rarely results in a meaningful reduction.

There is a more productive and easier way to determine relative preferences regarding initiatives.  This approach retains the advantages of scoring systems and defuses political sensitivities by embracing “fuzzy logic” to move the conversation forward.

Assigning relative importance (“must do,” “should do,” and “nice to do”) and relative urgency (“now,” “soon,” and “later”) to a set of initiatives (both existing and new) during an offsite meeting, and then stepping back to examine the clusters of activities that have been put in the nine resulting buckets isn’t precise, isn’t black-and-white, and isn’t crisp – by design.  But because it more closely matches the way companies actually run, it is a far more effective tool for aligning the various priorities of the management team – and it will give a firm foundation from which to have the ‘stop doing’ conversation.  Doing away with ‘Stop Doing’ – replacing it with ‘Nice to Do, Later’ – provides necessary cover to help manage the politics of killing off well-intentioned but marginally impactful efforts. 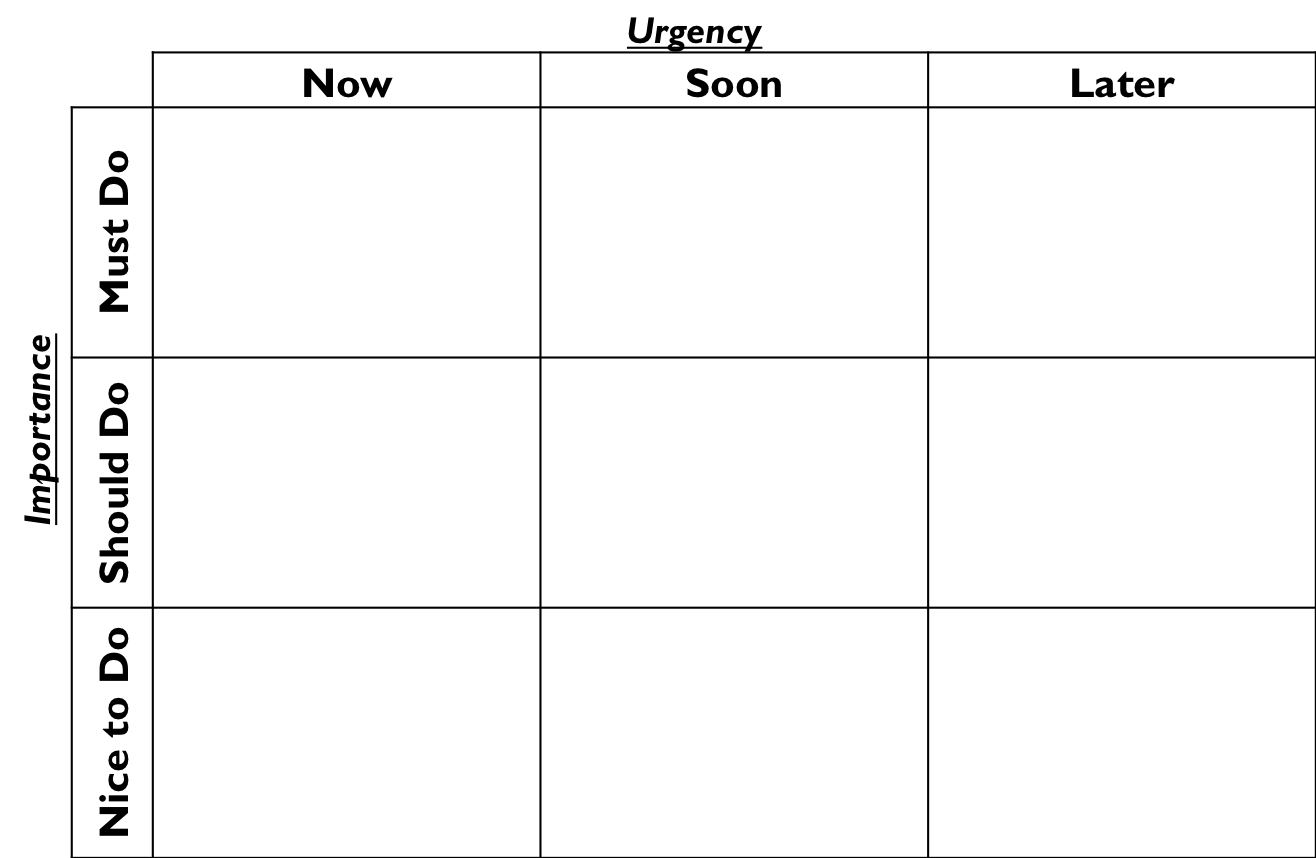 To read more about “fuzzy logic”, download a complimentary copy of our article “Critical Conversations That Reset How Your Organization Manages Initiatives” from our Articles page, reprinted from Harvard Business Publishing’s Balanced Scorecard Report.